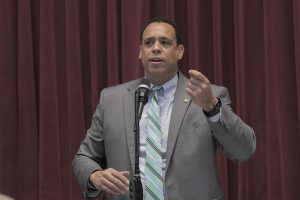 Republican Jay Ashcroft tells 939 the Eagle’s “Wake Up Mid-Missouri’ that voters will need to bring one form of voter ID to their November polling location. That can include a Missouri driver’s license that is not expired, a passport or a military ID that isn’t expired.

Secretary Ashcroft says his office will pay for official documents from other states or the federal government to help you obtain items like birth certificates. This link from Ashcroft’s office provides phone numbers and websites that can assist you in that process.

Secretary Ashcroft says if you don’t have a photo ID, you can still cast a provisional ballot.

State Rep. David Tyson Smith (D-Columbia) and other Democrats oppose photo ID, saying that any provision you put between someone and the ballot box will slow down voting.

Meantime, the secretary of state is personally opposed to legalizing recreational marijuana. Missourians will cast ballots on the issue in November, and Ashcroft doesn’t like the idea.

“I think there’s a qualitative difference between medical marijuana for people that have a medical condition or using it in a way that is medically good for them. The idea of just drugging yourself to change how you feel about things is just never something I’ve supported,” Ashcroft says.

The proposed November constitutional amendment would allow Missourians 21 and older to purchase and grow marijuana for their personal consumption. While he personally opposes the idea, Secretary Ashcroft says backers of the proposal had enough valid signatures of registered voters. He says he followed the Constitution and state law.