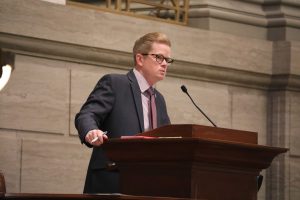 Missouri lawmakers are returning to Jefferson City today (Wednesday) morning for their annual veto session, which is required under the state Constitution.

Both chambers will gavel-in at high noon, under the Constitution.

The two chambers have GOP supermajorities, and Governor Mike Parson is a Republican. Senate President Pro Tem Dave Schatz (R-Sullivan) tells 939 the Eagle that he’s doubtful that there will be any overrides. State Rep. Peter Merideth (D-St. Louis) told KMOX Radio in St. Louis last week that he expects the House to attempt to override the governor’s veto on agricultural tax credit legislation.