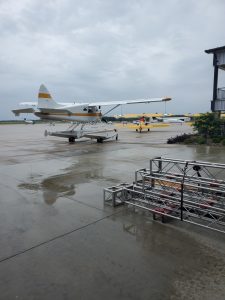 Veterans from across Missouri traveled to Jefferson City on Saturday to take a free ride in a Boeing Stearman World War II-era biplane. It was part of the “Fly into the 40s event” at the Jefferson City Memorial Airport.

The free rides were provided by the non-profit organization Dream Flights. Founder and pilot Darryl Fischer tells 939 the Eagle that Dream Flights is dedicated to giving back to those who gave.

“We’re so lucky, we’re so blessed as American citizens to have veterans that have fought for our freedoms and done what they’ve done for us. And it’s just kind of a little special way to say thank you to them,” Fischer says.

He says the flights put a smile on the faces of veterans, many of whom are in their 80s or older. Weather for Saturday’s fly-in was perfect, and the Missouri National Guard was also on-hand with military vehicles.

The Stearman biplanes are open-canopy planes that were used to train pilots in the second world war. Mr. Fischer is grateful to Columbia-based Veterans United Home Loans (VUHL) for hosting the fly-in.

“Veterans United is a very special company because they don’t have to do this. They’re doing this because they appreciate veterans,” says Fischer.