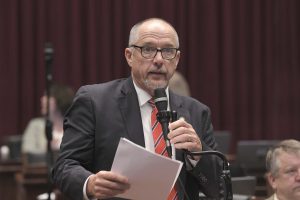 State Rep. Chuck Basye (R-Rocheport) is finishing his fourth and final House term, due to term limits. He says  he’ll finish his term, which expires on December 31. Basye will be working for U.S. Rep. Blaine Luetkemeyer (R-St. Elizabeth).

“I’ll be working in his office starting in January,” Basye tells 939 the Eagle.

In addition to serving as chairman of the House education committee, Basye also serves on the Joint Committee on Education. His primarily rural district includes parts of Columbia, along with Harrisburg, Higbee and Renick.