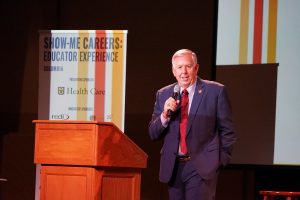 Missouri’s next attorney general to be announced Wednesday morning

Missouri’s governor will be announcing his appointment for attorney general Wednesday morning in Jefferson City.

Governor Mike Parson (R) has called a 9:30 press conference in his Statehouse office to announce the appointment to replace U.S. Sen.-Elect Eric Schmitt (R), the outgoing attorney general. Schmitt was elected to the Senate three weeks ago.

Parson spokeswoman Kelli Jones tells 939 the Eagle that the appointee will join the governor. The appointee will have two years left on the term. Schmitt was appointed attorney general in late 2018 and was elected to the four-year term in November 2020.