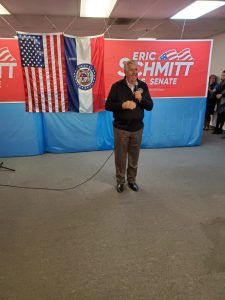 Governor Mike Parson and Senate Majority Leader Caleb Rowden (R-Columbia) were among those at the rally near Providence and Vandiver. Schmitt tells the audience that Dr. Anthony Fauci should clear his calendar for 2023. Dr. Fauci is the president’s chief medical adviser.

“I think one of the important roles the Senate will have is oversight. And I think there is a lot of questions we don’t know about the origins of the coronavirus, how he conspired with the teachers unions to shut down schools,” Schmitt tells reporters.

As for Schmitt, he’s predicting a red wave today and is confident about his race as well. He tells reporters that if he’s elected, he’ll focus on opening up energy production.

“We need to be energy-dominant again. We need to be a net exporter of energy. We have all the energy we’ll ever need under our feet. We need to make sure we’re utilizing that on behalf of the American people,” Schmitt says.

Libertarian Jonathan Dine is also on the ballot. The winner of tonight’s race will replace retiring U.S. Sen. Roy Blunt (R), who’s retiring after 12 years in the Senate.